Amalfi on a rainy day! That’s me on the right and my BFF, Lola on the left.

Thanksgiving has always been a time to create new traditions for me. I grew up in a very large extended family–and while I love my family, as an adult I took the first chance to excuse myself from the chaos and follow a more contemplative, relaxed, and, as long as I am being honest, quieter road.

For a while, before boyfriends, husbands, and babies, my best friend and I hopped across the pond and explored Europe. Thanksgiving is a great time to go to Europe–rates are low and its off season for London and Rome. If you are on a budget, this is a way to make the dream of going to Europe come true for a lot less money. The memories we made were worth every cent we spent. On Thanksgiving we always celebrated with a great dinner and good wine. I don’t think we were too obnoxious, but we were always happy to tell the people around us it was American Thanksgiving. 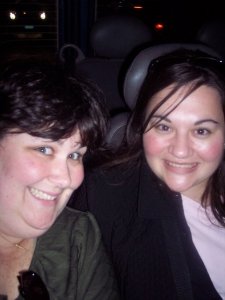 Look at the excitement of those faces! And we are on a bus to Pompeii here.

This is an excerpt from my journal at the time. It still makes me smile…and want to plan another trip:

Gelato eaten: Who cares. Did I mention I was in Sorrento?

When we drove out of Naples and into the rocky cliffs to Sorrento. We checked into the Hotel Michaelangelo (not Buonarotti, they were all very quick to point out, another one). I took a bath in the most fantastic coral marble bathtub. After all that talk about Roman Baths in Pompei, I was thrilled to have a chance to splash around.

I thought about leaving this story out, but I have to share it.

We had dinner in the hotel. It was Thanksgiving! We decided two things–1. We were getting dressed up and 2. We were drinking three bottles of wine. When we walked in to the well appointed dining room and were seated I noticed a commotion in the corner. When I looked over, several members of the wait staff and the men from the kitchen had dashed to the door and were more or less drooling on the travertine tile. I couldn‘ t help but grin at them but them I immediately looked away. I distinctly heard a Mamma Mia (they actually say that?). Even when they are lusting after the

new girls in town, they are still calling for their mothers 😉 Anything Lola tells you about the rest of this evening is likely to be untrue. She was making things up about me kissing a hot Italian waiter. All lies. He kissed me.

Early the next morning, we were up and ready to catch a hydrofoil to Capri. Through an act of divine intervention, our day in Capri turned into a private, escorted tour to Amalfi in a Mercedes instead.

We headed up and down and around the cliffs, through the three towns of Sorrento and around the coast. From the single lane road we could see Capri and the other islands in the Bay of Naples being beaten with waves. We pressed on, stopping to take some pictures, buy some pottery and nearly give in to car sickness (seems to me our driver would speed up, hit a curve, slam on the breaks and repeat). We went through Positano and Salerno and ended up in heaven.

Amalfi is the most beautiful place on earth. The drive is not for the faint hearted, the destination is remote and to say it is paradise would be to insult it. I couldn’t get out of the car fast enough.

Three steps from the small port, there is a rail, stone steps and a pebble and black lava sand beach. I stood at that rail unable to form words. There in front of me swelling and crashing and emphatically waving hello was the Mediterranean Sea. The Mediterranean Sea.

When I could pull myself away, Lola and I went back to the square and took it all in. They were putting up Christmas lights around the town’s patron saint, Andrew. His feast was the next day. We wandered into a chocolate shop (mmmm. Ginger), and wandered into the winding back alley streets. We stopped to buy a present for our favorite new baby and started talking to the shop owner, Maria. Maria has two unmarried sons in their thirties. She is 62 and would like to be a Nonna. Wink. Nudge. By the end of our chat, I think I found an apartment to rent in Amalfi. So, I am going to use it. More on that when I get home.

Before we headed out, I went back to the seaside view and it had improved. There beside me, out of nowhere was an olive skinned man the Hollywood could not have cast any better. He started talking (va bene) about two men on the beach by the waves and so on 😉 When I started to leave he made the pleading gesture and asked: Where are you going bella? And you wonder why American woman leave and never come back. Lola got a beautiful picture of an enormous wave smashing into the coast. I asked our guide about a stone structure on the very, very top of the mountain and she told me it belonged to the town hermit. The town hermit! That is awesome. She also told me the townspeople used to bring food up to him every week. This made me think; perhaps he didn’t intend to be a hermit. Maybe he just did not want to have to walk down the mountain every week and lug back groceries 🙂

The ride back to the hotel, which we nicknamed the Georges V, was harrowing. We made it one piece. I spent the rest of the evening savoring Amalfi…and when Lola took a nap, I mapped out my return strategy. If (and by if, I mean when) I am ever missing, don’t worry. You will find me somewhere between Sorrento and Amalfi.

Sigh. Those were some good days of being unhurried.

Friends we met on the road!

Merry ChristmasDecember 25, 2015
There is a lot of time to spend with family, community and friends. Pledge to enjoy it all until the season ends (and really beyond that, but I went for the rhyme)!

A flurry of Christmas Cheer

Upcoming Events To Make Into Memories